How to change the version of your server

Before continuing. Please note that changing your server version can lead to serious damage to the server if it fails. Be careful and always make backups of your important files when changing!

Why would you change your version?

A lot of people still use the popular versions like 1.8.9 and 1.12. These versions are good but mojang keeps updating minecraft itself. This means plugin developers are not going to support the old versions anymore. Long story short plugins are going to get outdated and stop working.

To get the latest plugin support, updating your server to the latest version is most of the time a good idea. Although sometimes you want old versions on purpose (think of 1.8 pvp). There is a downside to upgrading to latest versions though and that is speed.

The old server versions don’t have a lot to load. This means their load time is noticeably faster. The newer the version gets, the longer the server takes to start. Due to the increasing amount of objects / resources it has to load.

The dangers of changing

When modifying your server its version. Make sure you never downgrade. Due to worlds being different in 1.13 and above. If you downgrade from a 1.16 server to a 1.8 or 1.12 server. The world is going to get corrupted. So unless you want to just reset your complete server. we don’t suggest downgrading the version.

Keep in mind that upgrading versions is also not 100% safe. Worlds can still get corrupted / work could get lost. So if you don’t have to change the version, we recommend not doing it.

For a full list of frequently asked questions about paperspigot, head to their faq page.

In our opinion, paperspigot is more useful. Although it has some downsides. Paperspigot is generally a version that brings better performance. It still allows for every plugin to work.

Changing the version from let’s say spigot 1.12 to paperspigot 1.12 doesn’t change any of the files. It just adds more customising of the server. (mechanics).

What to do before changing

We recommend making a backup of all your worlds (downloading the world folder) and some important files you don’t wish to lose in case something goes wrong.

How to make backups

Clicking this button will download the file / folder. Make sure you save them somewhere where you can find them again if you need it.

How to change the version 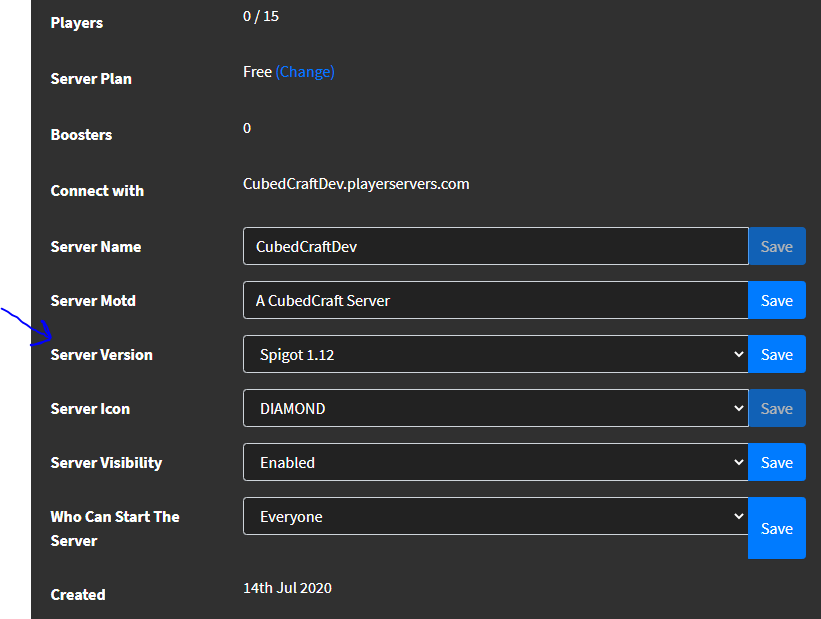 After changing your version (re)start your server. It may take some time for your server to launch since it has to update the files to the new version. If your server doesn’t start up after a few tries. Something probably went wrong.

We suggest checking out your server logs for errors. If an error occurred when the world got loaded. Your world probably got corrupted. You can try switching the version back to see if it fixes itself. If it doesn’t and you have a backup. You can ask an admin to restore the world back to your server. If you don’t want to wait for them. You can get FTP Access and upload the world yourself.

FTP Access requires 4 boosters. So if you have 4 boosters laying around, you could use them